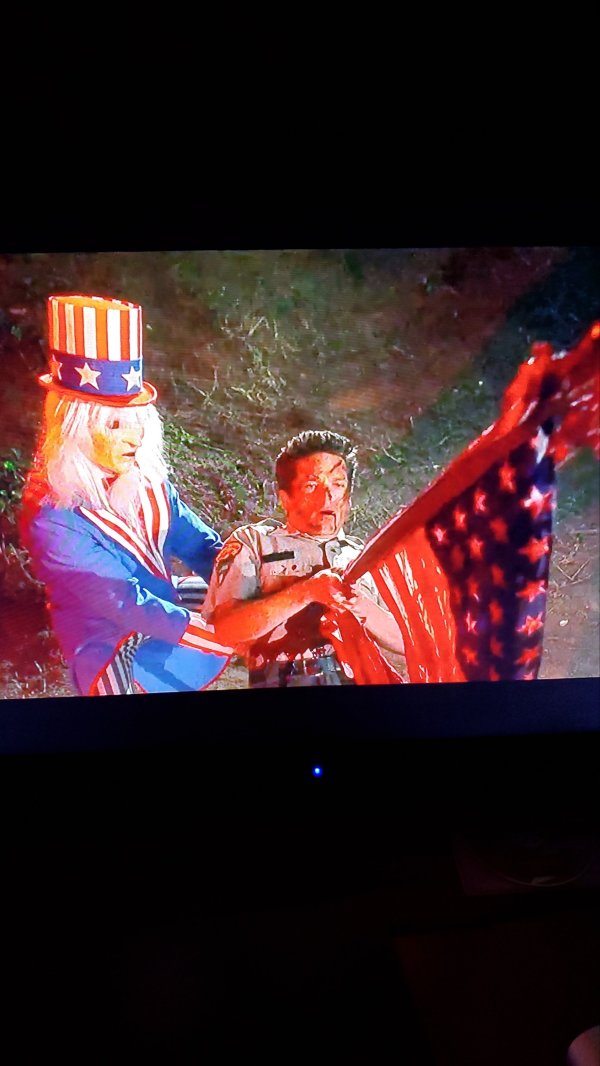 William Lustig and Larry Cohen got together in the 1990s to give us all a slice of 1980s style cheese known as Uncle Sam. This movie has some cool kills, yet too many of them were hampered by the budget and more likely the MPAA. I loathe those censoring bastards. Anyways this movie probably should have been longer and more fleshed out, and Joe Bob Briggs does have a point that some elements are randomly left unexplained when they probably warranted some exposition.

However Darcy the Mail Girl is correct in that this is a fun horror flick, and plus it’s a rare one set around the Fourth of July. I’m a sucker for holiday related movies in general and honestly one of our most celebrated holidays should have more flicks based around it. Plus I’m down with a movie that gleefully takes aim at how much war is glorified by people in this country, and how Hollywood is partly to blame in that regard.

Christopher Ogden is quite good as young Jody, who slowly learns the awful truth about his Uncle Sam, who he worships at first. Isaac Hayes has a great monologue in this movie where he tells Jordy not to join the military, where as Timothy Bottoms and Robert Forster show up to be major character actor victims. P.J. Soles even makes an appearance although I barely recognized her. There is a scene where one man is killed by fireworks and then this leads to another man being impaled on the American flag in what is probably one of the most impressive displays of cheesy slasher movie violence I have ever witnessed.

Honestly you could probably remake this movie now, yet it wouldn’t be quite the same although perhaps the gore would be more present. Add in an even more pointed takedown of military propaganda and you would have yourself a great movie instead of a merely decent one. Still check out Uncle Sam for a slice of 1990s comedy violence that fits well with Small Soldiers for a nice double bill.

Years later on Shudder I watched the regular cut of The Exorcist III after having seeing the Director’s Cut thanks to my local public library. I prefer the DC although the theatrical cut is also fine, even though I feel that Legion is far more scarier and has a more effective and creepier ending. Both center on evil refusing to die, the past coming back to haunt people, and of course that epic nightmare fuel jump scare scene involving someone wielding a large pair of sheers. George C. Scott anchors this film as a policeman searching for answers that lead him back to a dead serial killer known as The Gemini Killer.

The opening for Legion is different and features an odd, wind filled sequence in a church that inspires dread. Legion is about how evil never really dies and how the devil has endless ways of maintaining evil , only in this case it is through a long dead killer showing back up again. Brad Dourif has always been good at playing evil and crazy people, yet I think he is at his most terrifying here as Gemini, the instrument of the film’s awful events. I can’t think of a movie that’s made me wary of garden sheers than this one, or at least one that’s been made recently. Ed Flanders and Scott Wilson also do a great job as part of the supporting cast as well. Wilson and Flanders both were also in the equally great The Ninth Configuration, which Blatty also directed.

Although this isn’t as good as The Exorcist, The Exorcist III is a worthy sequel and is one of the best horror films of the 1990s. It has also held up pretty well, particularly in it’s discussions of faith, belief, and fighting against the forces of darkness. The battle is a dirty daily job, but according to Scott’s policeman someone has to do it on a daily basis and the war never ends.

I only saw Hack O-Lantern thanks to The Last Drive In With Joe Bob Briggs. I had no idea this movie even existed, and guess what: I liked it. Is it a good movie? Hmm…probably not. Is it my kind of bad trash that I embrace during each fall season? Absolutely. This film has goofy yet awesome one liners, breasts, gore, strange music videos and nasty kills. Plus cemetery sex, on top of a recently killed guy no less.

The opener makes clear that Tommy is a creepy kid who grows up to become a moody goth teenager. His murderous psycho grandpa wants him to embrace the ways of cult hood and become one with his destiny, or something like that. I love how this movie manages to rip off a majority of the Halloween series. They should have made a sequel that covers the rest of the franchise. Oh and the Halloween party scenes are a blast-I miss those times.

Although the last act is a bit too rushed for my liking, I enjoyed this flick. The characters are solid enough and this film achieves its goals and closes up shop rather quickly. I can admire a film that is businesslike and doesn’t need to mess around. “The power is in the blood…” or something like that. Spooky.