Lost in the discussion about Wes Craven’s career is that he engaged in comedic moments in many of his horror films. One such movie was Vampire In Brooklyn, a rather entertaining and fun horror comedy that has some good funny moments and even a few scares. Eddie Murphy in a rare horror movie role stars as a vampire seeking a cop played by Angela Bassett, who happens to be half human and half vampire. Without her the line of vampires from the Caribbean will finally die off. This movie has some decent homages to previous vampire films, and is also Wes Craven’s own take on the sub genre.

Much like some of his other films Craven presents social and political commentary. Murphy turns into a preacher and manages to convince an entire congregation that they should turn to evil. Unfortunately considering the hate many so called Christians push today such a moment is relevant and also darkly humorous to a degree. Also you have the police failing to comprehend and understand what they are dealing with, another theme that is prevalent in not only Craven’s work but also in many horror movies. I rather like how Craven is able to balance humor and horror, two genres that are tricky to get right.

Also it’s cool that he cast Zakes Mokae as a vampire hunter, since he was a horror veteran and he was great in The Serpent and the Rainbow, another Craven film. John Witherspoon and Kadeem Hardison provide additional comedic relief, yet it is Bassett who gives a strong performance and has superb chemistry with Murphy. It’s too bad that Eddie Murphy only made one horror film as he has a menacing presence. Despite its flaws this is an good, solid movie and is an example of how vampire movies contain views on society, religion and repressed feelings. 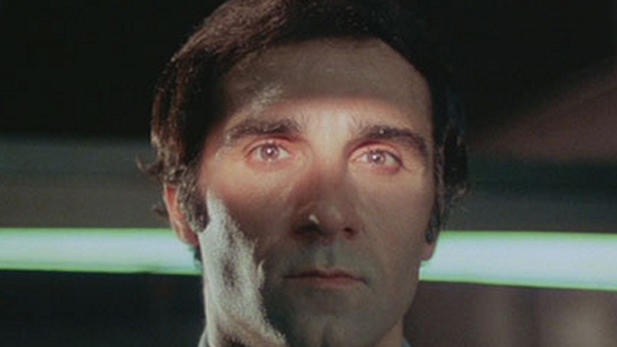 While the first film was really good and the second one a disappointment the third movie is somewhere in-between. Its an enjoyable film sure, and I liked it more than the second one, yet it has its limitations. Christopher Walken returned as Gabriel, who is now human and in search of redemption. In fact the film’s title is directed at him and not the main character, Danyael, who is the son of Valerie from the second movie, although its also concerning Danyael’s destiny. For Danyael must battle Zophael and Pyriel, who are bent on destroying humanity. One of the things I liked about this movie is how it brings the overlying arc full circle, only this time Gabriel is on the side of humanity since he was forced to live among them.

This aspect makes the film more interesting, and of course there are angel fights and the fate of mankind hangs in the balance as usual. Maggie is Danyael’s girlfriend and becomes forced by Zophael to go after Danyael. There is multiple jokes about driving once again, which is a staple of the series, and I liked that all three films have the same corner: poor Joseph at this point seems wary of angels, and is ready for his problems to end. I also liked that Gabriel ends up at the same dinner that he stopped at during the first film, and the final battle is outlandish, having been proceeded by freaky nightmares that Danyael has throughout the film.

Oh and this movie has some thoughts on God and religion, although they are very Hollywood in nature and therefore only scratch the surface of religious discussion. I liked how this one ended, and overall I have enjoyed the three films. There is a forth film yet due to Christopher Walken not being involved I don’t really consider it part of the series. I might still watch it but I’ll have low expectations. Sometimes trilogies work best.

There are two things you try to avoid discussing while drinking: religion and politics. Especially since the two seem to go hand in hand these days thanks to the right wing and the GOP. Keeping them separate would be nice, but its rather impossible. I’ve only made a few local politics oriented posts on this blog, so perhaps diving into both topics and my views on them would be something worth writing about. Maybe. I’m reminded of the great Orson Welles quote: “I don’t pray because I don’t want to bore God.” Too bad I don’t have anything that good in this article.

My parents brought me up as Lutheran Christian and they have always been fairly religious. I went to church every Sunday up until high school, when I started to trail off and become more inconsistent. Where as I was once fairly socially conservative college and my life experiences have resulted in me now being quite socially liberal. I oppose the drug war, feel that I have no business being against abortion (it should be a personal matter-the government should butt out) and I’m fully for gay rights. I realized early on in college that it was silly for me to be against gay rights and gay marriage because I didn’t have a proper reason for it to be illegal, and that it was in fact discrimination. I took a similar path to realizing this that President Obama took, and it wasn’t as easy as people think. Its difficult to come out in favor of something that your own religion classifies as a sin and which is heavily opposed to.

Still I believe in God and Jesus, even though I’m not as certain about anything religious anymore. When I was younger I thought heaven had to exist for sure, now I’ll admit I have no idea if it does or not. Hell almost seems like an abstract concept, devised by Dante and religious authority figures to scare the shit out of people. If it exists I imagine its worse than anything we could ever think of, but I’m not going to let some imaginary place dictate me living my life any different. And I’ll admit that its really easy to be an atheist these days-but agnostics annoy me. Either you think there is a God, Allah, Spaghetti Monster, or whatever, or you don’t believe an imaginary man in the sky exists. Sure the agnostic position has been argued for in many an intelligent writing, but it seems to me that most who hold such a view either have not thought it through enough or they are content to be fence sittings. That’s fine, although its really quite boring.

Politics is another story altogether. My dad’s side of the family is super Republican, where as my mom’s side does lean GOP but is more “Anti-stupidity,” which is what I often go with these days. I’ve gone from being a hardcore right winger to what I am nowadays, which is a centralist who leans towards the left simply because the right is awful at the moment. I will always be a moderate in either party, as I do hold some conservative positions-less taxes, cutting spending, pro-gun-yet also being as noted earlier, socially liberal. So I’m a man without a party, because both sides have gone so much to the extremes of either side that they hardly resemble anything worthy of voting for. I pick and choose the candidates worthy of my support, however I abandoned Obama after he had become so right wing on foreign policy that I was completely disgusted with his presidency.

I will admit that I have yet to vote for a Republican for president, although I did support Ron Paul in 2012 and then voted libertarian this past election. The Libertarian Party has some notably extreme economic positions, however they and the Green Party are the most honest parties in this country, which is why they never succeed in getting people elected. You have to lie to achieve office in this country apparently, although that’s always been the case since time immortal. Winston Churchill said it best: “It has been said that democracy is the worst form of government except all the others that have been tried.” I think there is some truth to that.

So there you have it: the abridged version of my views on two hot buttoned topics. If you have any questions on further opinions, feel free to leave them in the comments section. Or don’t-its a free country, after all.