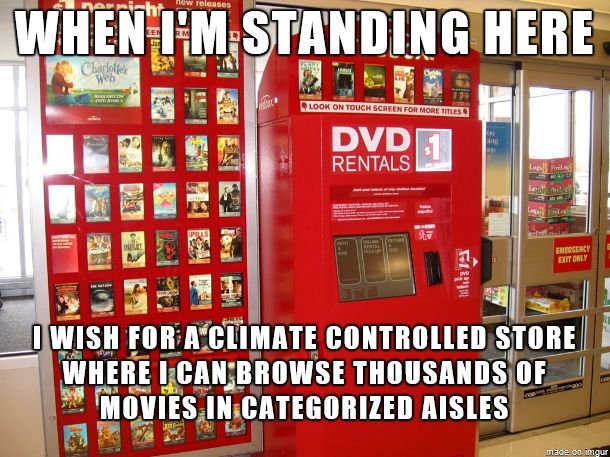 Mostly this is just a rant about RedBox, which I still use anyways and their streaming app has free stuff to view with adds. However the actual kiosk for the service is just the old video store without the charm or people and with fewer steps. You still have to return the movie in time or you keep being charged, if you want to buy the movie it’s usually more expensive to do so, and the selection is actually worse on the kiosk. I think RedBox does it on purpose so people use the streaming service and have to spend more money.

Video on demand isn’t much better than having to pay for numerous streaming services anyways. Even worse kiosk capitalism, (which after a quick Google search tells me the Washington Post wrote about in 1993!) is literally everywhere. On my recent trip I wandered into a McDonald’s without realizing that they had the ordering machines ready, which is probably why the people at the counter gave me a weird look when I went there first. I was expected to use the kiosk instead.

I’m pretty sure none of this is good, especially since it will cause people to lose their jobs and those machines usually break really easily. I would know since I deal with self check out machines at work and they cause me a great deal of annoyance and they well, break! Also something like the RedBox kiosks is really way too based on people not having Internet and also being willing to still use physical media in a world of online viewing. There’s a reason video rental stores went under in the first place.