This will be an annual event from now on, as last year was the first time I covered the Super Bowl on my blog. This year’s coverage will focus once again on key matchups, who will win (important of course) and on some of the major players.

Sure the two will not actually face each other on the field. Yet they very well might determine the game and who wins, as both are the field generals of their respective teams. Brady is a legend while Wilson is forging his own legacy although Wilson has been compared to Brady already in terms of being well known for post season success rather than stats. Never mind both put up plenty of quality numbers. I’ll give the edge to Brady based on past experience although Wilson is actually mobile and has a knack for hitting his wide outs. It is exciting to see how this matchup, which many felt was going to happen a season or two ago, turns out.

Matchup #2: Legion of Boom vs Bend or Break

Although New England has what could be its best defense in years they are known for fielding a unit that is aimed at keeping defenses honest even if it doesn’t seem impressive, although its led by stalwarts Jamie Collins, Vince Wilfork and Darrelle Revis, a legend already. Brandon Browner has already gone on record as saying he wants the Patriots to go after any injured Seahawks players, a message that could end up being a motivation for Seattle. Meanwhile the Seahawks defense is ridiculous, as its headlined by Richard Sherman, Earl Thomas, Kam Chancellor, plus Bobby Wagner. I have to give the edge to a Seahawks defense that is arguably the league’s best and also made Peyton Manning look silly last season in the Super Bowl. 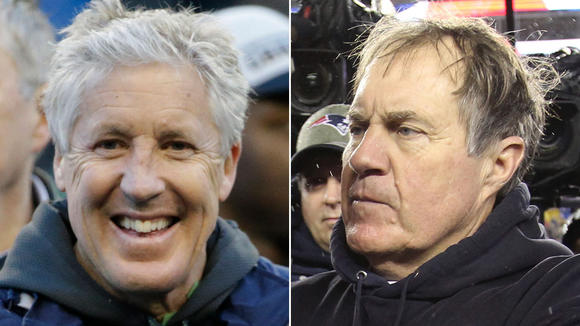 One future Hall of Fame coach versus another potential HOFer. Both are Super Bowl winners and are known for never losing. Belichick may have the edge in terms of repeating yet Carroll is no stranger to going back to back in title games even though that was in college. It’s worth noting that Belichick replaced Carroll as head coach of the Patriots after New England fired Carroll. That’s a storyline that will be mentioned plenty of times on Sunday.

Matchup #4: The Patriots offense vs the Seahawks offense

Losing Golden Tate and trading away Percy Harvin midseason hurt Seattle a bit yet they still have Marshawn Lynch and Doug Baldwin. Plus Jermaine Kearse is a great X factor for them as is Luke Wilson, an underrated tight end capable of big plays. Also Wilson can run really well and doesn’t make too many mistakes. Now the Patriots offense has Rob Gronkowski who is arguably the best tight end in the league and wide outs Brandon LaFell and Julian Edelman, both which are really good pass catches. The Patriots have LeGarrette Blount as their running back but also have several other backs they can roll out. Their X factor is Shane Verreen who can catch passes as well as run for touchdowns. Edge goes to the Patriots here based on Gronk alone.

Despite being the Patriots being the favorite I have the Seahawks winning instead. They have a better defense and Russell Wilson has a winning record against Super Bowl quarterbacks. This will be a hard fought and close game that could have a fantastic conclusion. My final score is Seattle 23 New England 20. And I really wish the game would finally go into overtime. No Super Bowl ever has.